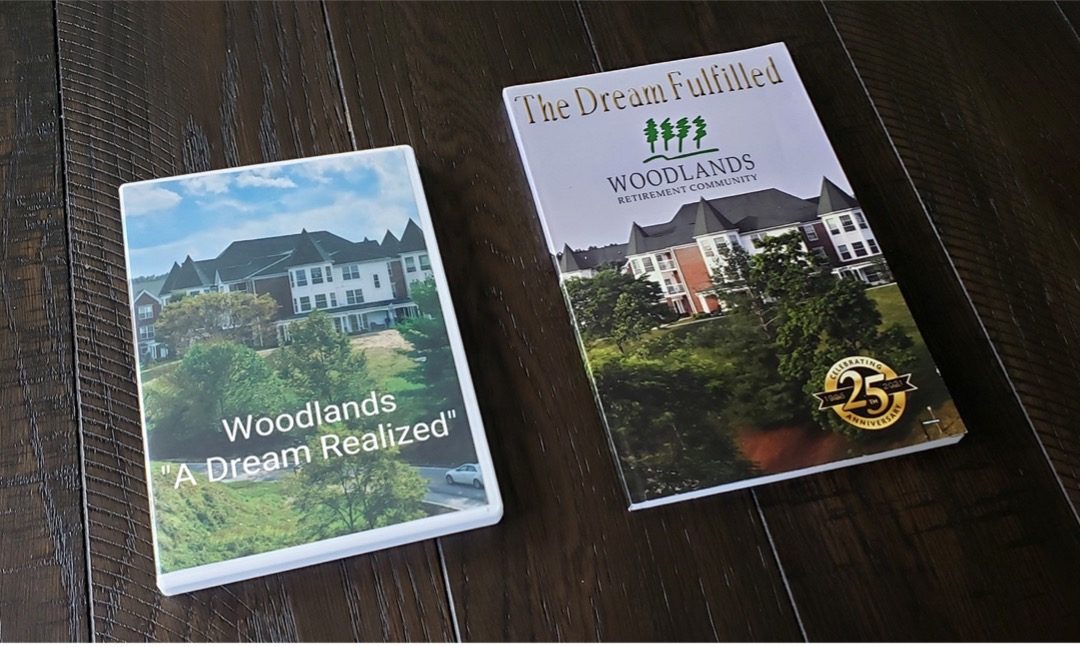 Woodlands has been serving seniors from the Huntington, West Virginia, area and far beyond for 25 years. When it came time to celebrate such an important milestone, there was no shortage of enthusiasm and energy on campus as the celebration was as special as Woodlands itself. In addition to the festivities of August 20, 2021, members of the community went above and beyond to create special tributes to document and preserve the legacy of this special place.

The 25th anniversary committee—a dozen highly involved community members—pooled the various skills and talents of their neighbors and friends and produced a documentary, “Woodlands: A Dream Realized,” as well as a 120-page yearbook, The Dream Fulfilled.

Here’s what one can find in each piece, and how each item reflects the incomparable Woodlands spirit.

The documentary: “Woodlands: A Dream Realized”

One may look at the title of the documentary and wonder, “Whose dream was it?” Well, the focus of the 24-minute documentary is to tell the story of Woodlands’ origins as the vision of the Rev. Gray Hampton. The video explains how he fulfilled his mission to bring a top-tier retirement community to Huntington, and how the Foster Foundation helped, too.

The documentary also covers some other important details such as how the development team chose and acquired the 170-acre hilltop site with insight from lead architect, Mike Milligan. Milligan also shared that the Woodlands board (including Hampton and Foster Foundation Chairman William F. “Bill” Agee) was the “best he had ever worked with.” That solid leadership from the start certainly helped Woodlands establish itself as the top choice for anyone looking to retire in the Huntington area.

As for the “architects” of the video itself, the 25th anniversary committee sought someone experienced in video production. Fortunately, one of Woodlands’ own was the perfect match for the project: Jerry Sutphin. Sutphin, like many of his neighbors, had an interesting and successful professional career. He spent time producing documentaries for PBS, so he knew exactly what was needed to produce a high-quality film for this project.

“Jerry was the first guest at the committee meetings,” Mary Lue Light, the anniversary committee chair, explained. “He gave us guidance on what we needed to compile, and recommended we reach out to his friend Chris Greenwood at 90 Acre Media. Jerry got excited about the project, so he ended up writing the script based on all the history and he did the voiceover, too. Chris helped with the filming, production and editing.”

The result? A professional-quality documentary that shares the history of Woodlands on its silver anniversary, as well as interviews and insights from current residents like Dot Hicks, among others. Dot, for her part, knew Hampton personally.

“We had a lot of good people working on it: writers, managers, people who put together the DVD,” Betty Barrett, fellow anniversary committee member, said. “The key was that we had experienced people on board, so we weren’t flying blind. It all came together well.”

The yearbook: The Dream Fulfilled

How is it possible to fit 25 years of history into 120 pages of text and images? It’s a tall task, but it’s one that the Woodlands anniversary committee tackled impressively. Upon flipping through The Dream Fulfilled, the reader will come to understand what makes Woodlands so special. More than 40 current members of the community share their stories, and each and every tale illustrates the welcoming Woodlands spirit. Similar to the documentary, the yearbook also includes a good bit about Woodlands’ history, and it dives a bit deeper to include some of the more recent happenings such as the winter ice storm of 2021 and how the community has remained strong throughout the COVID-19 pandemic. One member of the anniversary committee, Carolyn Hunter, also endeavored to include a special historical section that connects both current and past members of this community.

“I wanted to do a history of the cottages at Woodlands, so that’s in the book,” Carolyn said. “It lists who the current residents are for each of the 22 cottages here, as well as who had lived there previously. In the past, that info had not been stored in a binder somewhere, so we had to hunt for some of it.”

Speaking of storing information, the anniversary committee is already looking toward a new project that will—like the documentary and yearbook—preserve the history of Woodlands for the future.

The archive: Sharing stories for years to come

“One thing leads to another,” Mary Lue joked while explaining what she has been up to since the celebration dinner. “We’ve gathered a lot of materials during this period and one of our neighbors is a former librarian at Marshall who has experience working with archives. So, we asked Jeff Harkins, Woodlands’ CEO] if we could create an archive.”

Once established, the archive will preserve the hard work the committee did in compiling all of the materials and documents that supported the documentary and yearbook. Mary Lue also explained that there are a couple of other important pieces to preserve, such as old framed photos of Bradley Foster and his wife and of Hampton.

In Mary Lue’s words, the new archive will serve a “dual purpose” by easing the workload on future anniversary committees and sharing the history of Woodlands. Whether it’s helping prep for the next major milestone or simply providing a way for potential new neighbors to learn about this Huntington landmark’s rich heritage, the archive will be a welcome addition to this welcoming community.

With the documentary, yearbook and archive all preserving the special story of Woodlands, members of the community, residents and staff alike are all ready for the next chapter. As the final page of the yearbook says, “Here’s to the next 25 years!”

If you would like to obtain the documentary, “Woodlands: A Dream Realized,” or read a copy of the yearbook, The Dream Fulfilled, simply click here to contact us. And if upon reviewing the 25th anniversary materials you determine that you may want to make Woodlands a part of your next chapter, we would gladly welcome you for an in-person tour. Call 304-697-1620 today or click here to coordinate your visit. We’re ready for you to join our story!