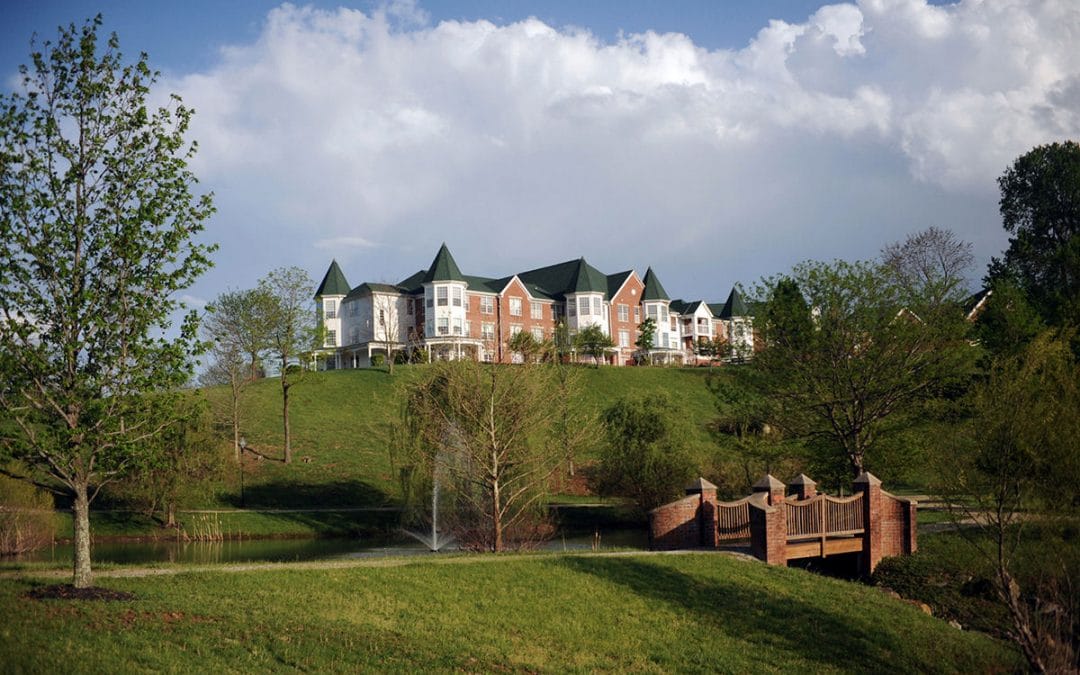 For us at Woodlands in Huntington, West Virginia, the arrival of 2021 brings the typical feelings of hope and renewal that come every time we flip the calendar from December to January. This year is extra special, though, as 2021 presents a major milestone in our journey of providing premier retirement living in Huntington. It’s our 25th anniversary!

We opened our doors to the first part of our community, the cottages, in August 1996. As we reflect on our rich history and how far we’ve come since then, we are excited for what this next chapter will bring. With the help of several dedicated members of our community, we have a lot of big plans in store as we celebrate a quarter century of Woodlands’ people and purpose.

A history worth celebrating

The original idea for an active retirement community like Woodlands dates back to the 1960s. At the time, the Rev. Gray Hampton, who would later become minister of Huntington’s First Presbyterian Church, was living in Greensboro, North Carolina and was trying to find a suitable place for his elderly mother to live in High Point, North Carolina.

His parish in Greensboro let him know about Continuing Care Retirement Communities (CCRCs), a new, exciting option for older adults. In the late 1960s, Hampton helped his mother join the waitlist at a CCRC in High Point, and she moved there in the early 1970s. His experience in North Carolina opened his eyes and sparked his efforts to bring a faith-based CCRC to Huntington.

From there, a meticulous planner and motivated leader, Hampton led the discussion at dozens of board meetings of the Foster Foundation, an organization that has served Huntington’s seniors since the mid-1920s. In 1985, Hampton proposed expanding the organization’s reach via the CCRC concept.

Over the next 10-plus years, Rev. Hampton worked with the foundation and wrote pages of letters with his mission and vision for Woodlands, which would eventually become the premier CCRC in Huntington. You can read more about our history here.

Coordinating and curating the Woodlands story

Mary Lue Light, who is working hard to curate and coordinate materials for the 25th anniversary celebrations happening later this year at Woodlands.

Enter Mary Lue Light: a Huntington native and member of the Woodlands community since 2016, who is leading the charge on documenting and preserving our unique story. As part of her role on the 25th anniversary committee, she has worked alongside our resident council (led by Aubrey King) to review historic documents from Woodlands’ past and coordinate special plans for this milestone.

“I’m personally and forever grateful to the Rev. Gray Hampton,” Mary Lue said. “This place is really home and it’s a special environment. We want to project that and how much we appreciate Gray’s idea.”

While planning and curating, Mary Lue has reviewed many of Hampton’s detailed notes and letters, and shared one of her favorite reflections of his on what this community symbolizes:

“I am always amazed by how God works to bring about good in our lives. It is my firm conviction that had he not been at work, Woodlands would not have existed,” he wrote.

So, how will Mary Lue and the rest of the committee appropriately mark this major anniversary and capture the spirit of the top faith-based, not-for-profit destination for retirement living in Huntington?

Their approach hinges on four main components: a video, a book, a celebration dinner and even a “mini musical” production led by Woodlands resident Janice Chandler Gold, a renowned former high school music and theater teacher in Huntington.

“It was actually in the fall of 2019 that we started planning,” Mary Lue explained. “Aubrey King came to me and asked if I would consider helping plan the 25th anniversary events. I told him I would, and we had a couple meetings to figure out how we would celebrate.

“We prepared a list of all the things that came to mind,” she added. “There’s such a wealth of skill and background here among our neighbors, we knew it would be easy to draw from their knowledge and work.”

The committee decided to produce a 30-minute video on Woodlands’ history with the help of a local media company. They also connected with a fellow resident who had produced videos for PBS, and he told the committee what material they had to gather so they could craft a compelling story. The team then worked to obtain materials such as Hampton’s notes and interviews with people who had a part in developing Woodlands.

“We’ve done interviews with the architect, who was only 30 years old when he was commissioned to design Woodlands,” Mary Lue said. “He visited in October 2020 and spent the day with us, and we had a delightful 45-minute interview with him. We also interviewed Red Dawson, whose contracting firm did the excavation here, and whose story is so important to Huntington and is fascinating on its own.”

But the video would just be part of the storytelling. To allow for more participation and input from current members of the Woodlands community—some of whom have lived here since the 1996 opening—a book would be produced as well.

“We thought, if we have the video, let’s produce a book as well,” Mary Lue said. “We didn’t want a scrapbook; we wanted a bound book that features residents’ stories, like an anniversary yearbook with photos of the community over the years, too.”

Many of those photos, Mary Lue explained, will capture the essence of the “Woodlands estate,” as she lovingly refers to it due to the community’s beautifully landscaped grounds and abundance of wildlife seen here year-round. She has counted as many as 70 Canadian geese at one of our ponds, and mentioned the presence of deer, wild turkeys, coyotes and even the occasional black bear! A photo of it will be in the anniversary book, of course.

To tie it all together, the anniversary committee is planning a formal dinner celebration in fall of 2021 for residents of the community as well as for VIPs such as the architect and Red Dawson. Mary Lue, whose bright and pleasant disposition helps her live up to her last name (Light), is hopeful the dinner celebration will happen as planned.

“We haven’t hit any bumps in the road; we’re not letting negative thoughts come in,” she said. “We’ve gotten so much help from all the people and all the residents. Everyone has been so excited and cooperative, and everyone wants to do a good job because we’re all really proud of this place!”

Over the next several months, Mary Lue and the anniversary committee will be working to complete the book and the video by late spring 2021. The latter part of the video will include a segment featuring current Woodlands CEO, Jeff Harkins, and his thoughts on the future of Woodlands, and his vision for how the community will remain the premier option for retirement living in Huntington.

Until then, stay tuned to this space to see how it all comes together as we enjoy this milestone year. And if you want to be a part of the next chapter in the Woodlands story, click here or call 304-697-1620 to get in touch for a personalized, private appointment!