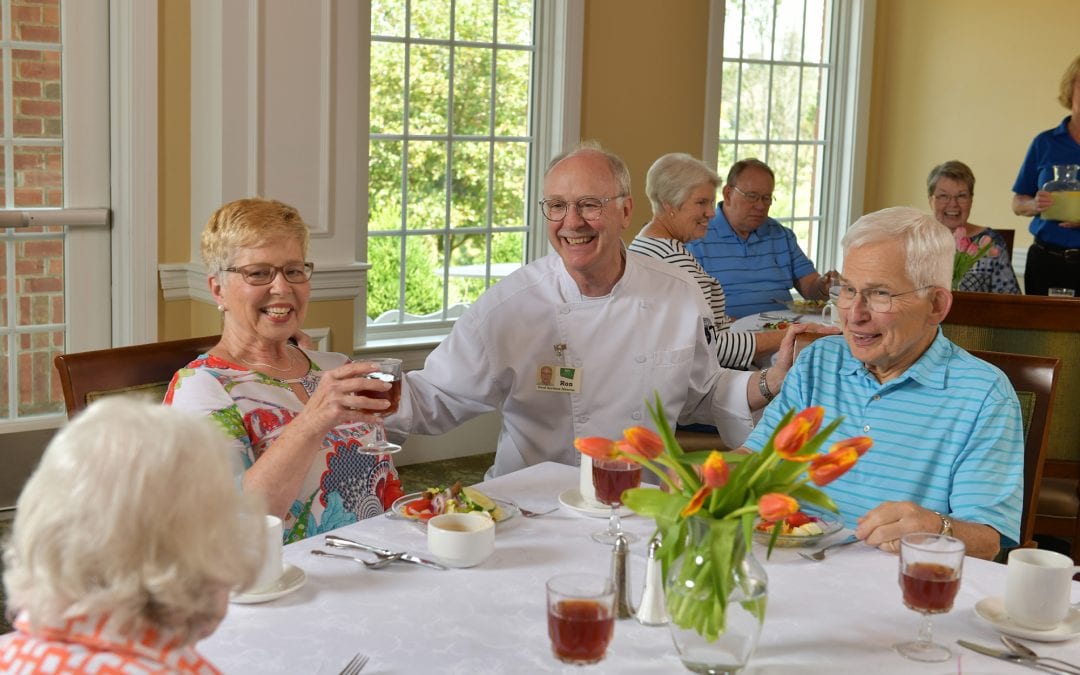 On a typical day, Ron Smith can probably be found cooking and loving it. A chef and restaurateur, Ron is also the director of dining services at Woodlands. So, he spends most of his time leading the charge for the entire dining department at the community and cooking up new ways to provide healthy, tasty meals for everyone.

But Ron brings much more to the table than just good food. Through his volunteer work with various Huntington, West Virginia, organizations and causes, he’s earned a spot on the Huntington Wall of Fame. It’s easy to see why.

Every fall, you can find Ron leading a different, spicier charge. Ron is the founder and coordinator of ChiliFest, which has evolved over the past 36 years to become the International Chili Society’s West Virginia State Chili Championship. The event draws tens of thousands of people to Huntington’s Pullman Square every September, and it goes beyond the beans to benefit the Ronald McDonald House Charities of Huntington.

“ChiliFest started as a promotion for a Tex-Mex restaurant I owned downtown,” Ron explained. “When it became a success and the local TV station wanted to partner with us, we began looking for a beneficiary, a worthy organization with a good volunteer base.

“The Ronald McDonald House had just opened here in Huntington, so it was good timing, and we ended up forming a really great relationship. Over the years, ChiliFest really picked up in popularity and we’ve donated more than $600,000 to the organization.”

In addition to ChiliFest, Ron also serves on the board of directors for the Ronald McDonald House Charities of Huntington. So, besides his contributions each fall with ChiliFest, he helps year-round and has been a part of some major initiatives and accomplishments.

“The House is next to Cabell Huntington Hospital, which was planning to add a Children’s Hospital annex,” Ron said. “So, that made it even more important to have a strong Ronald McDonald House here. The board pushed for an expansion, and now it’s an even bigger part of the community, and financially stable.”

When Ron reflects on the difference he has made through ChiliFest, he explains that it’s rooted in his passion as a chef for bringing people together through food:

“It goes beyond the dollars and PR for the Ronald McDonald House; it’s how the community has embraced it. People talk about it in town, on social media, they look forward to it. It’s great to see people come together as a community and do it for the fun of the event.”

Doing what he loves while making a difference

Similar to many other members of the Woodlands community, residents and staff alike, Ron’s involvement in Huntington, West Virginia, is multidimensional. He has served on the town’s Municipal Development Authority and Urban Renewal Authority (which led the development of the popular Pullman Square where ChiliFest is now held), and he’s an active member in his church.

“I’m a member of the Greek Orthodox Church, so I also help with the food service for our parish’s annual Greek Festival,” Ron shared.

He continued to explain that the Greek Festival is more than a fundraiser in that it also educates people about Greek culture and the Greek Orthodox faith. The most gratifying aspect of his role with the festival, though, is how it ties into his love for cooking.

“I am a chef, I enjoy food, so the festival is all about culture through food,” he said. “Naturally, as a chef, anytime you can bring people together through food, that’s really the mainstay of your craft.”

Ron explained that Woodlands initially hired him as a consultant to create a plan to optimize the community’s dining services equipment, layout and processes. Once CEO Jeff Harkins saw the report Ron prepared, he specifically asked Ron to make it happen.

“It was a different approach to be in this setting, definitely different than my decades of being a chef and restaurateur,” Ron said. “But it’s been a fun challenge to create great meals and menus for people at all stages of retirement. Our job in dining services is so important because we need to nourish the entire community through food, which is my craft, so it’s been pretty natural. Being able to serve others and work toward that common cause has made it so fulfilling to be here.”

Ron is one of many members of the Woodlands community who is dedicated to serving others. He’s also one of Woodlands’ multiple Huntington Wall of Famers! Throughout Woodlands you’ll find thoughtful, unselfish people like Ron, including residents John Anderson and Dan Ingram, who also do their fair share of giving back. Get to know John and Dan by reading their stories and meet other Woodlands residents on our blog.

Having a community full of people like these makes Woodlands a truly special place, which is something you can feel from the moment you visit. If you think this active community of inspiring neighbors would be a good fit for you, we’d love to host you! Simply click here or call 304-697-1620 to get in touch.